RSS Feed
Correction: A previous version of this article incorrectly used carbon and carbon dioxide interchangeably and described CO2 emissions as being measured in metric tons of CO2. The data source for this article measures CO2 emissions in metric tons of carbon. You can convert from carbon to carbon dioxide by multiplying the figure by 44/12 or 3.67, according to the CDIAC's FAQ. The story has been updated to reflect these changes.
Environment
Navigate Latest CO2 Emissions Data by Nation and Per Capita
By Anthony Calabrese
July 27, 2010

Carbon dioxide emissions are rising around the planet, with China surpassing the United States as the world's leading producer.

The data show that 20 out of a total of 215 countries together contributed to more than 75 percent of all global CO2 emissions in 2007. This group of 20 is made up of industrialized nations such as the U.S., Japan and Germany, as well as rapidly industrializing nations such as China and India.

When looked at on a per capita basis, the data show the U.S. still among the 20 top producers, while results for more densely populated nations such as China and India are significantly lower.

Use the interactive dashboard below to analyze CO2 emissions data for countries from six continents. The line graph at the top allows for comparison of the per capita CO2 emissions in metric tons of carbon for each of the 20 countries.

Use the interactive stack graph to see how each of the 20 countries measure up: 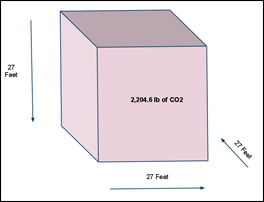 A cube of CO2 would be nearly 30 feet tall and weigh over 2,000 pounds. As a point of reference, the average height for Americans age 20 and over is about 5' 8" for males and 5' 3" for females, according to a 2008 National Health Statistics report (PDF).

How Big is a Metric Ton of Carbon Dioxide?

To understand the sheer volume of a metric ton of CO2, imagine a giant cube that weighs about 2,200 pounds and is nearly 27 feet tall, 27 feet wide, and 27 feet deep - that's what artists did before the United Nations Climate Change Conference in 2009. According to the CDIAC data, the average American produces more than 19 of these giant carbon dioxide cubes every year.

A Closer Look at Per Capita Emissions

The U.S. was the 11th highest per capita CO2 emitter in the world in 2007, when compared to all of the countries in the CDIAC database. Countries such as China and India, which topped the list for total CO2 emissions, have per capita emissions of 4.95 and 1.43 metric tons of CO2 respectively.

Use the interactive table below to view the 20 countries with the highest per capita CO2 emissions. What 20 countries are the world's lowest CO2 producers?

Per capita CO2 emissions for 215 countries

Posted by Anthony Calabrese at 12:56 PM on July 27, 2010
BE A BETA TESTER A 'beta,' or initial State of the USA website, is currently in development. To volunteer to participate in our future beta testing program, email us (with subject line: 'Beta Test'). All submissions are private. For questions, please use the feedback box below.