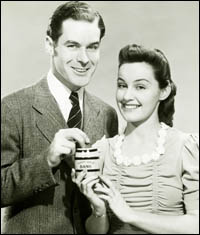 A sharp rise in the number of opposite-sex, unmarried couples moving in together this year may be less romance and more about surviving in a struggling economy, according to a new report by the U.S. Census Bureau.

In the first first seven months of 2010 there was a 13 percent increase in the number of couples cohabiting -- a jump from 6.7 million to 7.5. Looking at employment demographics, the study found the couples who had recently moved in together were more likely to have at least one partner unemployed than couples who had been cohabitating for some time.

"It would be odd to say this year was emotionally different, so it's more likely practical considerations that are behind the increase in cohabitation," Rose Kreider, a Census Bureau demographer and author of the report, told the Associated Press.

Krieder also said in the report the increase cannot be attributed to changes in how the data, taken from the Annual Social and Economic Supplement (ASEC) to the Current Population Survey (CPS), was collected and analyzed. "After much analysis, Census Bureau staff considered all changes to the processing system that could have produced the increase in cohabitating couples and concluded that no steps in the processing system could have created the increase."

Use the interactive graph below to track monthly cohabitation trends since January of 2009:

A more detailed look at the demographics in the study finds that more men in newly formed couples did not work last year than men in couples that were moved in together in 2009 - 24 percent to 14 percent. Also, couples who began cohabitating in 2010 were younger, less likely to be White, non-Hispanic, more likely to live in the South (which tends to have higher poverty levels than other regions in the U.S.), or live in a household with five or more people.

Krieder speculates in the report that in the years preceding the increase people maybe have been "exhausting other methods of coping-unemployment benefits, savings accounts, available credit, or assistance from friends and family." She also states that the fact that more couples are younger may point to a lot of young adults, with less employment experience trying to find jobs in a competitive job market.


(Increase in Opposite-sex Cohabiting Couples from 2009 to 2010 in the Annual Social and Economic Supplement (ASEC) to the Current Population Survey (CPS),  Associated Press)

Suzette Lohmeyer is a staff writer and producer for State of the USA.

Posted by Suzette Lohmeyer at 11:10 AM on September 24, 2010
BE A BETA TESTER A 'beta,' or initial State of the USA website, is currently in development. To volunteer to participate in our future beta testing program, email us (with subject line: 'Beta Test'). All submissions are private. For questions, please use the feedback box below.