Florence Nightingale traveled to Turkey in the mid-1850s to lead a group of nurses to help treat British soldiers during the Crimean War. When she arrived, sanitary conditions were dire and mortality rates were high. Bodies were buried in open pits behind hospitals, excrement blocked sewers and soldiers were ill equipped.

During her two years working in the war, she compiled detailed records to chronicle the problems and causes of death, and upon her return in 1856 continued to track the data and collect statistics from British hospitals. Her findings revealed that illness and other scourges including poor sanitation conditions far outweighed battlefield wounds as the cause of death in the Crimea. 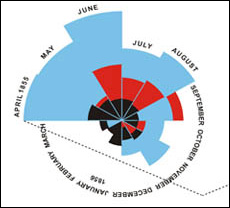 Florence Nightingale's famed coxcomb graph, a forerunner of the modern pie chart, was used to depict mortality data from the Crimean War. Complete graph and explanation.
Born May 12, 1820, "Nightingale was just one of those brilliant, multi-faceted people, and she showed a pension for statistics early on. By the age of 30, she was the most knowledgeable person on health statistics throughout Europe," says nurse Barbara Dossey, a nursing historian and Nightingale scholar in Santa Fe, N.M. She was "in many ways the mother of statistical data designed to address health outcomes," notes Deva-Marie Beck, a nurse and Nightingale expert who co-directs the international nonprofit Nightingale Initiative for Global Health (NIGH).

Nightingale, who died at the age of 90 in 1910, used applied statistics for social reform throughout her 50-year career in nursing. Her statistical gathering and research during the war helped her gain a foothold in the growing field of medical statistics, clout with policymakers and adoration from the British public.

The nurse's pioneering work helped change sanitation and record-keeping practices for civilian and military hospitals and helped push for better, life-saving health care practices. She served as an expert on nursing and health statistics in Britain and abroad. Nurses during the Civil War and health care providers in India used her teaching practices and methods to track patient statistics to improve conditions, according to NIGH co-director Dossey, who has written several books on Nightingale.

Nightingale's work caring for soldiers and chronicling causes of death became a watershed moment for establishing the need for accurate data collection to determine causes of death and enact changes to health care.

"Her main early claim to fame came from her marshalling of public health data during the Crimean War to demonstrate the fact that there was a tremendous excess of mortality in the field hospitals in Turkey and the Crimea," says Stephen M. Stigler, an expert on the history of statistics and chair of the University of Chicago's statistics department. "She did this in a very clever and very well-done statistical comparison looking over time comparing the mortality rate in the field of hospitals with the forces mortality rate in the British military hospitals back in England."

Nightingale carefully noted the causes of death and found the greatest cause of mortality in the Crimean War was due to diseases such as cholera and not to battlefield injuries, Stigler says. Starting with her early nursing work at 1853 at the Harley Street Nursing Home, Nightingale realized that "if you want to create change you have to have what we would call today evidence-based data to be able to make and articulate the arguments that are going to be essential to help other people," according to Louise C. Selanders, a nurse historian and Nightingale scholar who directs Michigan State University's nursing master's program.

The statistics Nightingale compiled showed "conditions in the Crimea were deplorable. (Soldiers) were not getting the supplies they needed. They were not getting cooperation from doctors and that in order to create change and not have these vast numbers of soldiers dying, they had to have the most basics kinds of things. They had to have food and clothing. They had to have adequate medical care," says Selanders, who co-authored a book with Dossey titled "Florence Nightingale Today: Healing, Leadership, Global Action."

When Nightingale arrived to the war, there was no accurate count of how many soldiers had been deployed there or died, Selanders says. To remedy this, Nightingale created forms and sent them to contacts throughout posts in the Crimea to help document how many soldiers died and from what causes, according to Dossey. She developed methods to in-process patients and track vital statistics and created universal hospital forms to collect accurate patient medical information - procedures that are now commonplace and essential components of medical care. "She literally revolutionized hospital data collection," Dossey says. 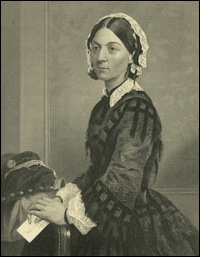 Florence Nightengale, considered 'the mother of statistical data designed to address health outcomes.' (Courtesy of the University Libraries, The University of Texas at Austin)
In order to compile her data from the battlefield and British hospitals Nightingale worked closely with leading statisticians such as William Farr, a founder of medical statistics. She is famous for using graphical displays of her data to give the statistics context, realizing early on that officials would likely ignore numbers without a picture to get their attention.

Her so-called coxcomb graph was a precursor to the pie chart. She used the polar area graph to depict mortality data from the Crimean War including the number and causes of deaths. It is more accurately a wedge diagram and used three different colors to show deaths from preventable diseases, war wounds or other causes, according to Dossey.

"She used a dramatic form of graphical display that just jumps out at you and you say, 'Wow, something is going on,'" Stigler says. Nightingale showed the growth and change of soldiers' mortality rates over a year's period within a circular diagram. "She was not the first to employ circular diagrams of this sort," the professor says. "The point is they were a brilliant way of showing her data and it worked very well."  Stigler used Nightingale's data to recreate her wedge diagram and found her pictorial representation of figures "was exactly right."

Nightingale "wanted to make a dramatic impact but she did it without cheating." It's an important lesson for today when graphs, tables and charts often are used to show data for key policy issues. Nightingale was a prime example "of what good statistics could be in a time at the beginning of the growth and the use of statistical analysis in policy," Stigler says.

Nightingale was born in England in 1820 to a well-heeled, upper-class family. Her Cambridge-educated father taught Nightingale and her sister languages, philosophy and science and later hired math tutors for Nightingale.

"She was very good at math early in her life and her father encouraged that even though that was not the thing to do with young women in her time," according to Thomas E. Heinzen, a professor of social psychology at New Jersey's William Paterson University. He studied Nightingale for his 2008 co-authored statistics textbook.

By her early 30s, Nightingale began surveying hospitals and conditions for nurses. In 1854, she was sent to the Crimean War to help wounded soldiers. She "immediately began to start counting things. She recognized the counting system was in complete shambles. She was very much in favor of fact-based statistics," Heinzen says.

Transcript: "When I am no longer even a memory, just a name, I hope my voice may perpetuate the great work of my life. God bless my dear old comrades of Balaclava and bring them safe to shore. Florence Nightingale."

(Courtesy of The British Library)

Nightingale noticed that in the Crimea, cholera deaths were only counted on Saturday and people died in three to four days from cholera, among other discrepancies.

"Anyone admitted Sunday or after and died was not in the counts," says Heinzen. She discovered the number of deaths was grossly underreported and helped remedy that. Nightingale's work in the war to improve record keeping and sanitation led to a drastic drop in mortality rates.

Armed with these statistics that showed how illnesses and other problems outweighed battlefield wounds for causes of death, Nightingale was able to push for social change back home in England after returning in 1856, despite being discouraged by the medical and political establishment and suffering from an illness she contracted during war that affected her for years. The famed nurse used her connections with British public figures and did a lot of behind-the-scenes campaigning to power broker and advocate for change. In one instance, she wrote to Queen Victoria from the war and met with the queen within weeks of her return, Dossey notes. She pushed for a government review of the health of the British army, and thanks to her efforts a Royal Commission, the equivalent of a congressional hearing, was granted and held in 1857.

In the months leading up to the commission, Nightingale visited hospitals in England to gather statistics and found similar problems faced in the Crimea, according to Dossey.

"She was very interested in trying to get the government to take care of the soldiers," says Lawrence H. Riddle, chair of the mathematics department's of Georgia's Agnes Scott College. Riddle has studied Nightingale for a biographical project on women in mathematics. Nightingale did not appear before the commission, but worked to garner support for the data and contributed diagrams to show the depth of the problems.

"She was convinced that people would never read this report because it was just full of text and numbers, but she thought people would look at the pictures," Riddle says.

Nightingale's efforts paid off. The commission issued its report later that year calling for an army statistical department, army medical school and instilling sanitary conditions at army barracks. Nightingale wrote her own 830-page report in 1858 detailing army health care issues. That same year she became the first woman elected as a fellow of the Royal Statistical Society and she later established a nursing training school, which still exists today.The American Statistical Association named her an honorary member in 1874.

"What we do today is sort of an outgrowth of what she started in the 19th century," says Riddle of tracking health statistics. "She was certainly involved in the beginning of the revolution of using data and using statistics to look at hospitals and health reform issues."

Cynthia L. Webb is a freelance journalist who has covered national and international news and specialized in business and technology reporting since entering the news business in 1997. Webb has worked as a staff writer and reporter for The Washington Post and The Associated Press and as a columnist for washingtonpost.com.

Posted by Cynthia L. Webb at 3:00 PM on June 3, 2010
BE A BETA TESTER A 'beta,' or initial State of the USA website, is currently in development. To volunteer to participate in our future beta testing program, email us (with subject line: 'Beta Test'). All submissions are private. For questions, please use the feedback box below.