Happiness comes with age, according to a new study - age 50 to be exact. The report, published in the Proceedings of the National Academy of Sciences, found that people generally feel good around age 18, followed by a steady decline into unhappiness that lasts right up until about age 50. From 50 to 85, people feel progressively better, with 85 year olds reporting a greater sense of well-being than the 18 year olds.

How is happiness measured? What do the authors speculate are reasons for the sudden mood upswing at the end of middle age? And do other emotions follow a similar age-related pattern?

The Best Way to Find Out If Someone is Happy - Ask

Professor Author Stone, the study's lead author, explained in an interview with National Public Radio that self-reporting is really the only way to assess a person's happiness. Using data from a 2008 Gallup telephone survey of 340,000 people between the ages of 18 and 85, interviewers asked questions about each person's global well-being (general satisfaction with one's "aspirations, achievements, and current circumstances" on a 1-10 scale) and "hedonic" well-being (current positive and negative feelings).

What they found was that self-reported well-being had what Stone described as a "U-shaped relationship with age." People are happiest in their 20s, 70s, and 80s. In between is a line graph that troughs in middle age at around 50.

The graphic below shows well-being for males and females of different age groups. 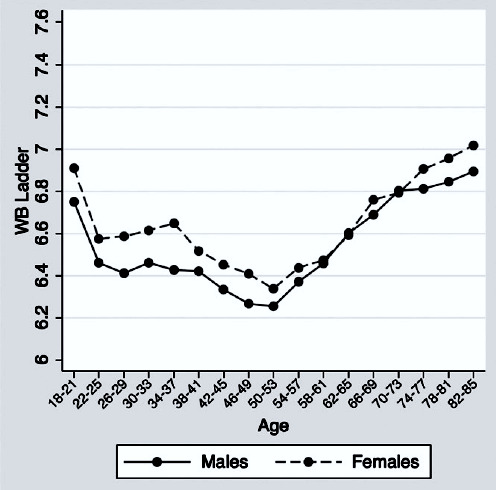 What Is So Depressing About the 30s and 40s?

Stone is very clear that the reasons for this pattern are, "a big puzzle," explaining to the New York Times that the study wasn't set up to find out why. But he does say there are some possible reasons that are worth researching that fall in three major categories: environmental, psychological, and biological. The former includes life changes such as children leaving the nest, financial stability. The second might include "how we view the world," and the latter might be changes in endocrine levels with age. But in this study, they did not find any obvious correlation.

The study also followed other emotions. Not surprisingly, enjoyment followed almost the same U shape as happiness along almost identical age frame. Sadness, on the other hand, steadily increased with age, peaking at 50 and then beginning to decline. Stress and anger, interestingly, peaked early - at age 18 and 22 respectively - and then declined. Worry hung on steadily right through until age 50 when it began to fall rapidly.

(A Snapshot of the Age Distribution of Psychological Well-Being in the United States, Charting Happiness: Study Finds It Comes With Age - NPR, Happiness May Come with Age - New York Times)

Posted by Suzette Lohmeyer at 2:44 PM on June 11, 2010
BE A BETA TESTER A 'beta,' or initial State of the USA website, is currently in development. To volunteer to participate in our future beta testing program, email us (with subject line: 'Beta Test'). All submissions are private. For questions, please use the feedback box below.